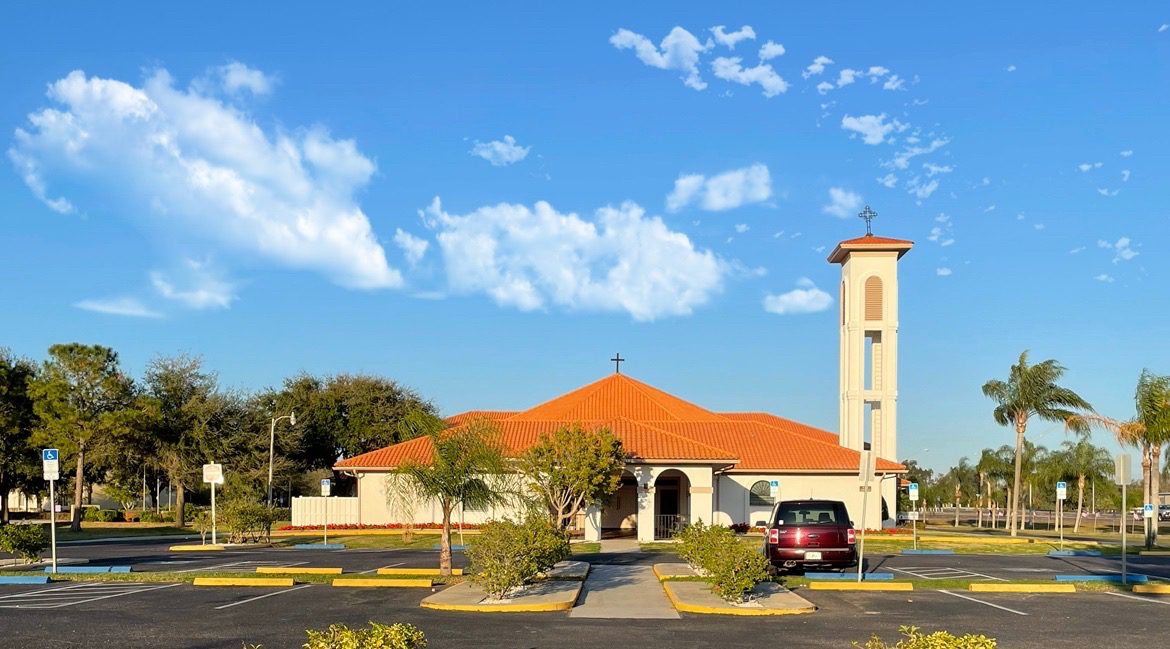 On October 21, 1956, Archbishop Joseph P. Hurley of Saint Augustine sent Fr. Joseph O’Shea to Palmetto as the Administrator of the first Catholic church to be built in Manatee County. On that day, Mass was celebrated at the Palmetto Women’s Club, and the Holy Cross Mission was born.

Shortly after his arrival, Fr. O’Shea began a building campaign for the church. The diocese procured fifteen acres of land in December 1956, one mile north of Palmetto on US Highway 41. Fr. O’Shea served the 100 Catholic families of the Holy Cross Mission until March, 1957, when Fr. James C. Fahey became the new Administrator.

Ground was broken for the new mission church on June 8, 1958 and the first Mass was celebrated in the church by Fr. Fahey on November 30, 1958. Dedication of the Holy Cross Mission Church by Archbishop Hurley took place on December 12, 1958.

From 1959 to 1960, Fr. Frank Goodman served as Administrator. During this time, the parish purchased a used building and moved it to the church’s property to serve as a much-needed parish hall. St. Joseph Parish donated a one-story building with seven rooms, which was used as a rectory and offices for over twenty years. On February 16, 1960, Fr. Daniel Carrigan was appointed Pastor of the new Holy Cross Parish.

Because of Fr. Carrigan’s declining health, Fr. Vincent Llaria was appointed Pastor on January 1, 1978. His main goal for the parish included a parish/social hall, a larger rectory, and a new church. On January 19, 1980, the fund drive began for a social hall, and on August 3, 1980, the parish hall groundbreaking took place. The new, five-bedroom rectory was completed June 22, 1984.

Finally, the kickoff for the new church was held in March 1986, followed by the ground-breaking on April 9, 1988 by Bishop John J. Nevins. The first Mass and the dedication were celebrated in the 1,300-seat church on December 3, 1989, officiated by Bishop Nevins.

In 2003, the parish hall was renovated and the Holy Cross Garden of Peace (Memorial Garden) was established. The old church became the Religious Education building and was named for Fr. Llaria. On December 16, 2007, Bishop Frank J. Dewane presided over a mass at the parish followed by the dedication of the Holy Cross Circle of Honor and the blessing of the circle garden of four flags.

In 2008, the parish community celebrated its 50th Anniversary.

Our most grateful thanks to the following priests whose priestly assistance during the past number of years has been greatly appreciated.

Rev. Vincent Russell Pierino, appointed Parochial Vicar – June 20, 1989
Fr. Perino was born on August 29, 1938 in Buffalo, NY, the son of Anthony J. Pierino and Frances Militello. He has two brothers, Charles and Anthony and one sister, Mary Ann. In 1960 he graduated from Niagara University with a BA in Classical Language. Fr. Pierino was ordained into the priesthood on February 22, 1964 in Buffalo, NY by the late Most Rev. Bishop James McNulty.

Rev. John Anthony Stahl, assisting since 1978
Fr. John was born on August 8, 1922 in Indianapolis, IN. He was ordained on May 15, 1951 at St. Meinrod Arch Abbey, St. Meinrod, IN and celebrated his first Solemn Mass on May 20, 1951 at Our Lady of Lourdes Church in Indianapolis. His first assignment took him to St. Andrew Church in Richmond. Among many of his assignments before he became Pastor of the Church of American Martyrs in Scottsburg, IN, were Chaplain for the Civil Air Patrol, Deanery Director of the Boy Scouts and Catholic Youth Organization, plus the 2,700 patient East Haven State Mental Hospital. Father served as Pastor of St. Lawrence Church in Indianapolis and Administrator of St. Thomas the Apostle in Fortville. After a series of coronaries, Father retired and eventually moved to Bradenton, FL.

Rev. Arthur Meloche, Holy Cross Missions and assisting – 1982-1985
A Native of Canada, Father was ordained in 1941 and has been in retreat work since 1947 when he was named Director of Retreats for the London, Ontario Diocese. His post graduate studies were taken at the Institute of Catholique, Paris and he has lectured in Theology of Marriage at the University of Notre Dame, the University of Detroit, and the University of Western Ontario. Fr. Meloche is an experienced and dynamic priest and has helped thousands of persons to draw on spiritual resources to cope with stressful personal problems.

Rev. Edmund J. Farrell, assisting since February 1985
As Fr. Farrell tells it, Bishop Joseph Breitenbeck of the Diocese of Grand Rapids, MI is the most pastoral and considerate Bishop any priest could ever hope to have, for on June 26, 1985, Bishop Breitenbeck, after consultation with Father’s doctor, retired this priest and pastor from active duty after serving the church of Grand Rapids for more than 40 years. Fr. Farrell was ordained at St. Andrew’s Cathedral, Grand Rapids, on December 8, 1943.

Rev. Juan Pozuelo, Priest-in-Charge-of-Migrants, 1985-1988
Referred to as the “Man of LaMancha” because that is the area in Spain where Father was born, he is a man of the people but primarily, a man of God. He was an inspiration to all with whom he came in contact while at Holy Cross and is sorely missed. Father is now on mission in Republica Dominica.

Rev. Emiliano Alamo, Priest-in-Charge-of-Migrants, 1988-1989
Born in Santa Maria Mercadillo, Burgo, Spain, Fr. Alamo received the Dominican habit in Calerguega in 1958, received studies in Philosophy and Theology and was ordained on December 18, 1965. Prior to his coming to Holy Cross, he was at St. Andrew Parish in Cape Coral. Father is now on assignment in Puerto Rico.